Twenty twenty two draws to end,the year Covid finally caught up with me,never been so ill before.But i returned to the Far North of Sweden again and still had  25 wild camps, maybe one more before year end
The first camp was on the south side of Grisedale pike and saw me and my brother racing upwards to just pop out above the cloud on the summit,just as the sun started to set ..We met up with Matt Holland and camped up for the night....even got a little Aurora too the North
Camp 2 was on Sail summit after a great walk around these Wainwrights,Matt left us at Crag hill as we carried on around,just pitching as the cold rain and wind hit
Camp 3 was with a lad from work whos just starting out forcast was a brief lull then big winds and lashing rain,i choose Great Yarlside summit and it proved a good spot again.Lakeland walling taking most of pasting form the gale force wind and heavy rain ....less said about the walk out in the morning tho ! ..wetter than an otters pocket
Camp 5 was over on Branstree summit and another small showing of the Aurora
Camp 6 was a very busy one,myself and Jamie met Andy Beavers and walked up with him,meeting Matt Holland again along the tops.Then Dave Mills ? met us at camp too....the Young lab Maggie came along too
Just back from Causey pike summit gave a nice spot for two shelters,we continued onwards the next day and finished at a nice spot just down from Maiden moor summit for camp 8
A circuit to tidy up some North Eastern fells saw us camp near Lords Seat,a real struggle to find water that night
Another 2 night trip saw us do some Northern fells before ducking down to Bowsacle tarn to avoid the storm force winds,just beating the heavy rain to camp
A few peaks later the next day in 50-65 mph winds saw us nearly walk back to the car,till we found this sweet pitch next to the river..Maggie loved playing her new game....Find wool throw into wind and chase wool 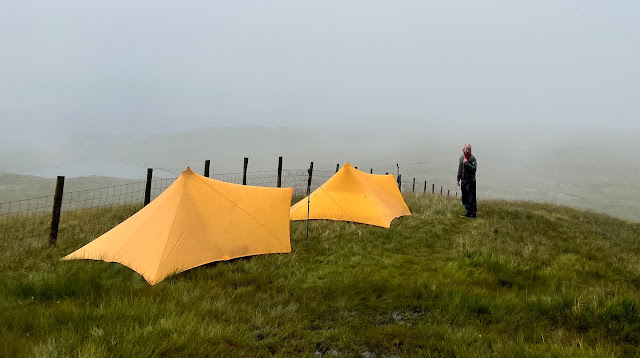 A planned meet up with some Trek-lighters didnt work in the end due to some shocking weather,but we got our route done and camped up near Standing crag,a very wet night but the walk out next morning wasnt too bad
With Maggie in tow it was up to the Northern fells again,a cracking pitch in the end up above Floutern tarn,the next day after a big traverse of the ridge we did initially camp on Fleetwith pike summit
Then some folk came and just pitched right next to us ! and then some more and as we packed to leave some more...never happened before ! Luckily we found a spot on the path down the nose ...so all was good again
Camp 17 came after i made a shit navigationally error (well never navigated,if im honest ) we had to continue onto the Kungsleden path but we did find this pitch with a lovely blue loch to look out   Miesakjavri/Ahpparjavri
Next day after a large river crossing we were back on route the day ended wet and camp spots were hard to find till we crossed the bridge at the North end of the Visttasvaggi valley,finding this nice spot just above the roaring river
Camp 19 was a return to pitch below the stunning Nallu peak in the equally picturesque Nallu valley
Camp 20 was after a tough day after we had crossed the first two passes on the Jo-Jo trail,the first of these was a tough/sketchy route up.Then as we finished the 2nd pass we had to walk along way down the boulder strewn valley till we finally found a spot to camp..Goubirvaggi valley
The last pass completed we camped up high in the Tarfala valley
Camp 22 i used a spot by the river i found 5 yrs ago on my first trip in these amazing lands,that night we had a fantastic Aurora showing...well this night was even better it just went on and on !
It started at 9-30 pm,it was still not properly dark yet,we gave in at 2-30 am.The temp had been the warmest of the trip 18c in the valley but then by 8-30pm it was -4c then by 10 pm -6.4c where it stayed all night...as finishing nights for a trip go it could not be any better 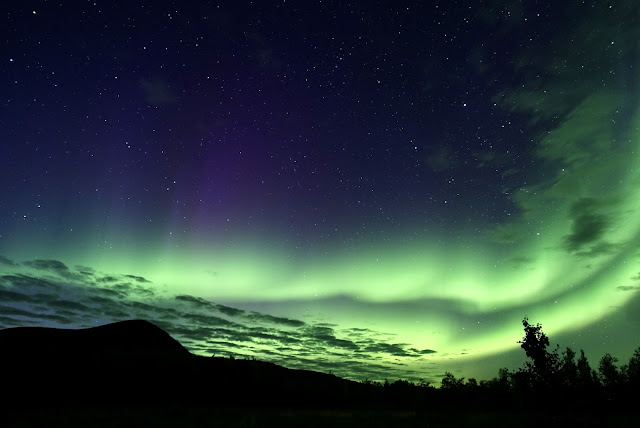 Back to my home ground of the Lake District i had a camp out with Maggie,traversing the Crinkle crags and then camping just of Cold pike summit
Camp 24 and 25 below,may be the last of the year.We had a great few days collecting new Wainwrights for Jamie...walked out past Skiddaw house to camp on the Knott summit,next day we walked over to Skiddaw and then had another good camp on Lonscale fell summit
So 25 camps over the year:
Eight in the MLD Duomid XL
Three in the MLD Duomid
Five in the Tarptent Scarp 1
Nine in my MLD Trailstar
So to those ive camped with,thanks for the company,those who fancy joining shout out sometime ....to all i know Best wishes and good health,work and position is nothing the bite of the cold,the burn of heat returning to fingers,the feel of a powerful wind,sound of rain on a tight shelter roof,the sound of soft snow sliding on shelter walls,the ache of tired muscles,the first brew at camp,warmth of the sun,a view after hours of clag,the look of love from a cannie friend...the years of memories of good dogs gone and present.....these are the things that make us   Plus the love of a good woman and your children
Safe travels and easy miles   Peter 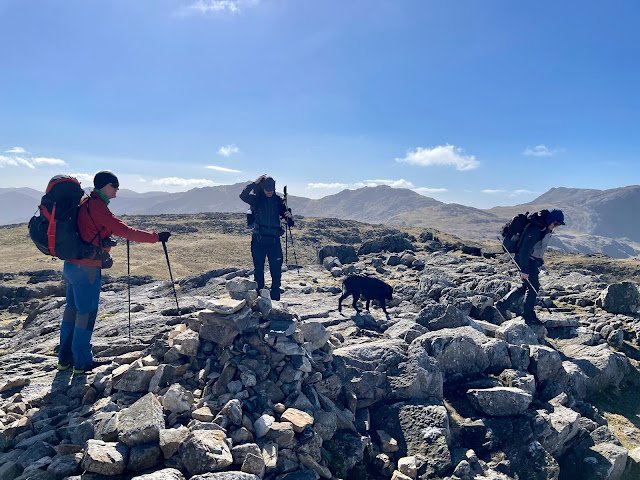 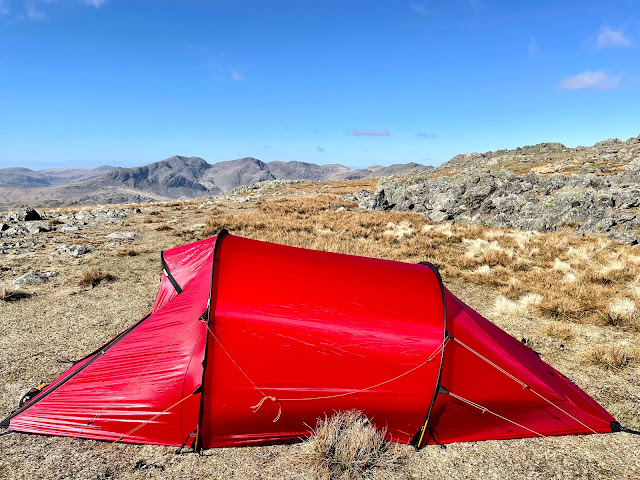 Twenty twenty one wild camps for the year